British (Airborne) Carrying Case executed in webbing. for a twin 303 ammunition carrier for supporting the Vickers of the heavy weapons section The webbing case is clearly makers marked and 1945 dated. IMO in unissued condition with only trace of storage. Cannot be upgraded.  read more

This is a very nice and attractive WH (HEER) Medical Chest. In clear used condition with some damage as shown yet very attractive. The wooden chest has been re-used by either Dutch or Flemish civilians and is filled up with large quantity of bandages. Would make a great item on display!  read more


IMO in near mint condition this Camoflaged Leather Jerkin. The Jerkin appears to be in unissued condition with only some trace of storage. There is a clear and crips label present measuring a size 2 and 1942 dated. In the interior there is a clear War Department mark with the letter O, indicating 1942 being also the year of issue. A fantastic camoflaged leather jerkin that would be hard... read more

A very nice and rare example of a Royal Air Force silk escape map. Produced in 1944 prior to Normandy the map is on a Scale 1:2,000,000. D / C. The map features the English Channel, France/Normandy, Holland And Belgium. Measuring approx 17” x 20 1/2”. These maps would have been worn as scarves by Pilots and Air Crew. Also known to have been used by U.S. Airborne troops during the D-Day invasion... read more

In nice used condition and still greased for preservation this Bakelite Fuze box for the German 3,7 Panzer grenade.  read more

In nice used condition and still greased for preservation this Bakelite Fuze box for the German 3,7 Panzer grenade. The box has a minor damage on the front.  read more 
Increasingly hard to find these days this British Wool V Neck Pullover i.e. Jumper. Fitted with a clear label measuring size one and dated 1944. The label is clearly marked with the Broad Arrow. On the shoulders there has been a period modification often applied bij officers and NCOs in order to display there shoulderboards/rank. There some damage on the arm of the jumper. Yet still an ... read more 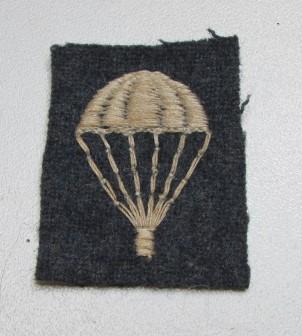 
A very nice and neat example of a British Auxiliary Territorial Service (ATS) Economy Cap Badge. The badge is clearly makers marked on the clip on the rear of the badge and fitted with kings crown.  read more 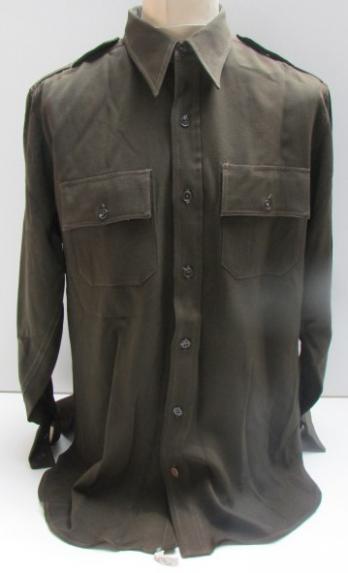 In nice used condition this very nice U.S. Officers Wool Shirt. Fitted with original manufactor label and minimall trace of wear this shirt has very nice patina. There appears to be no size marking yet compromises a very decent manequin size. Hard to be upgraded.  read more