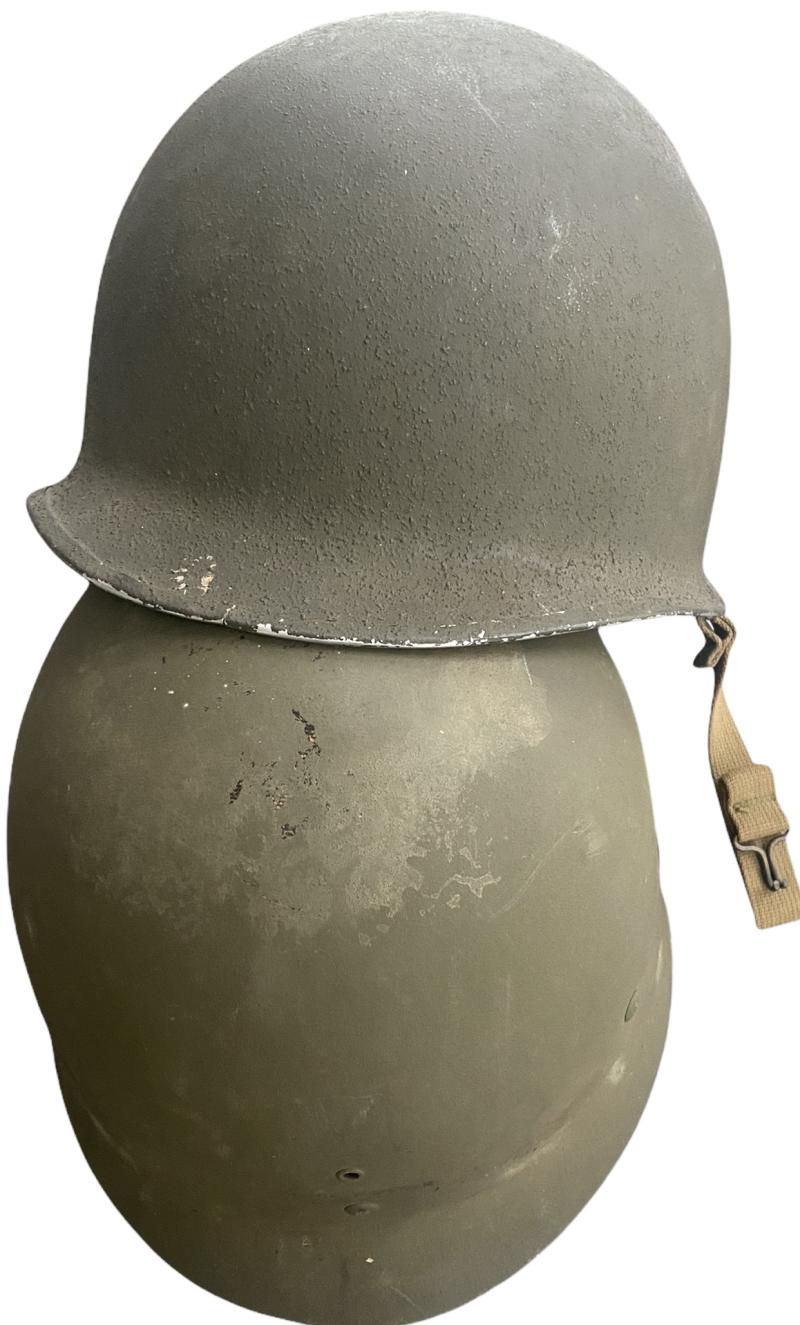 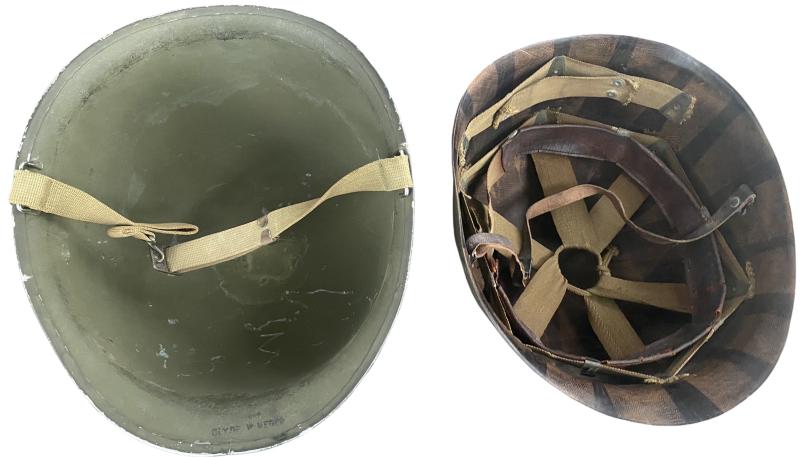 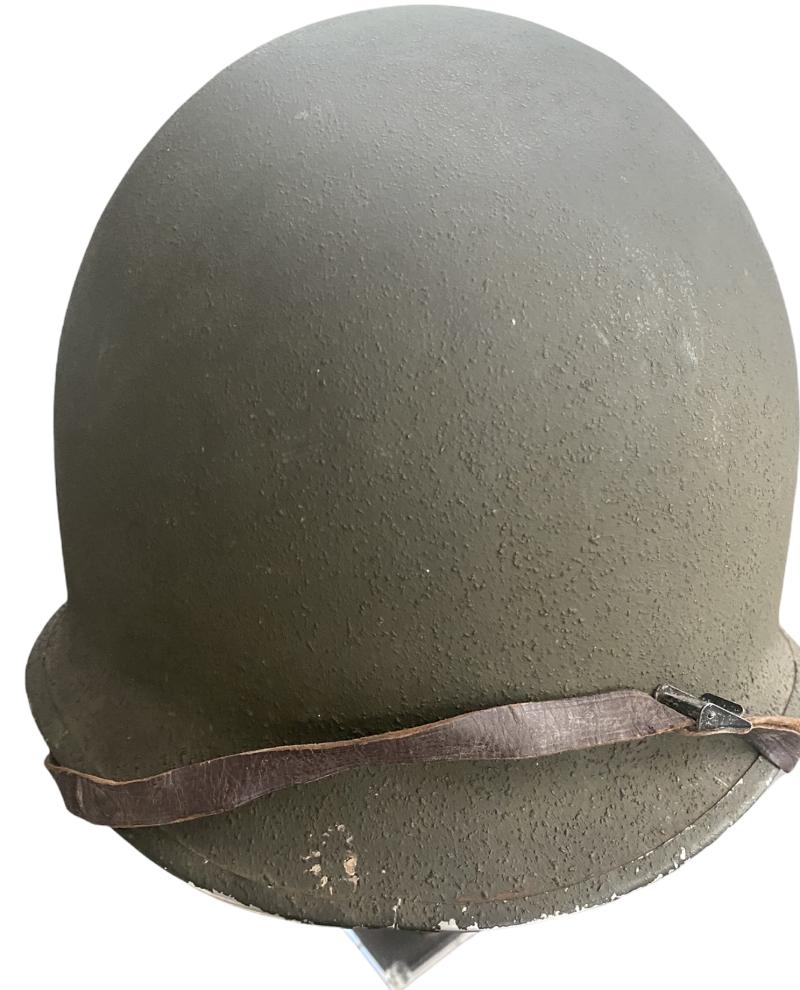 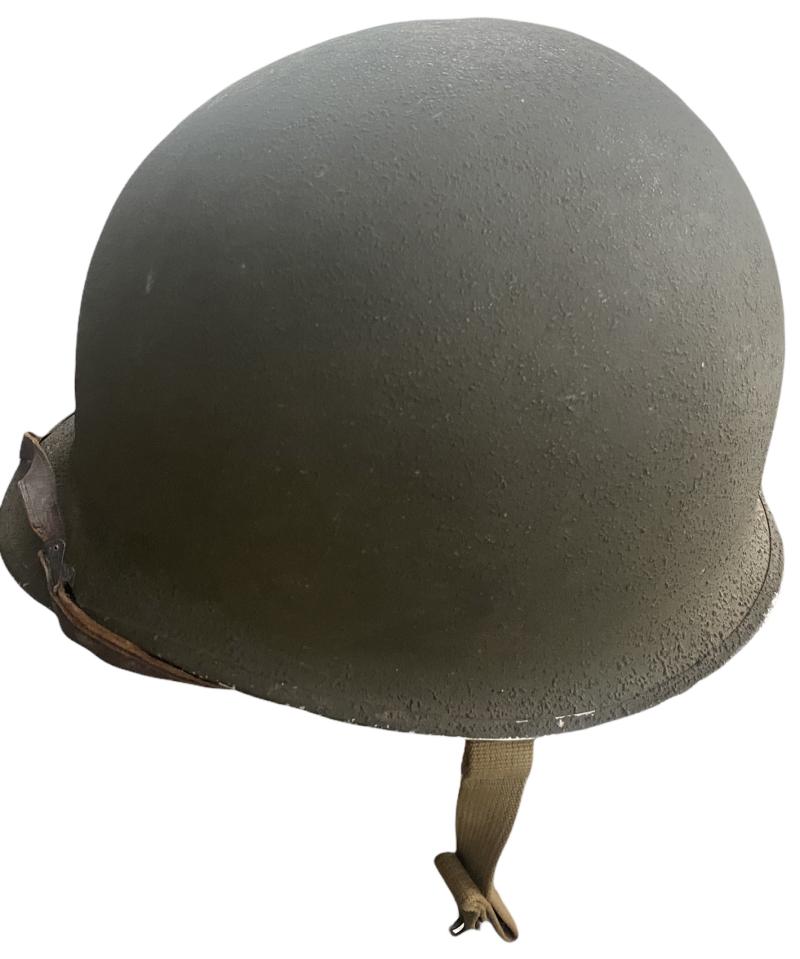 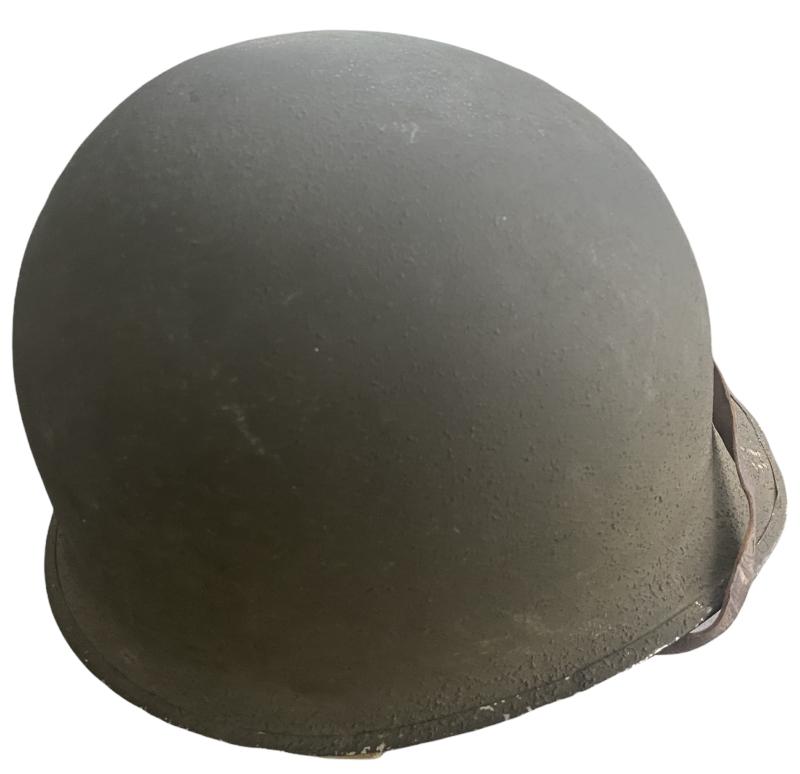 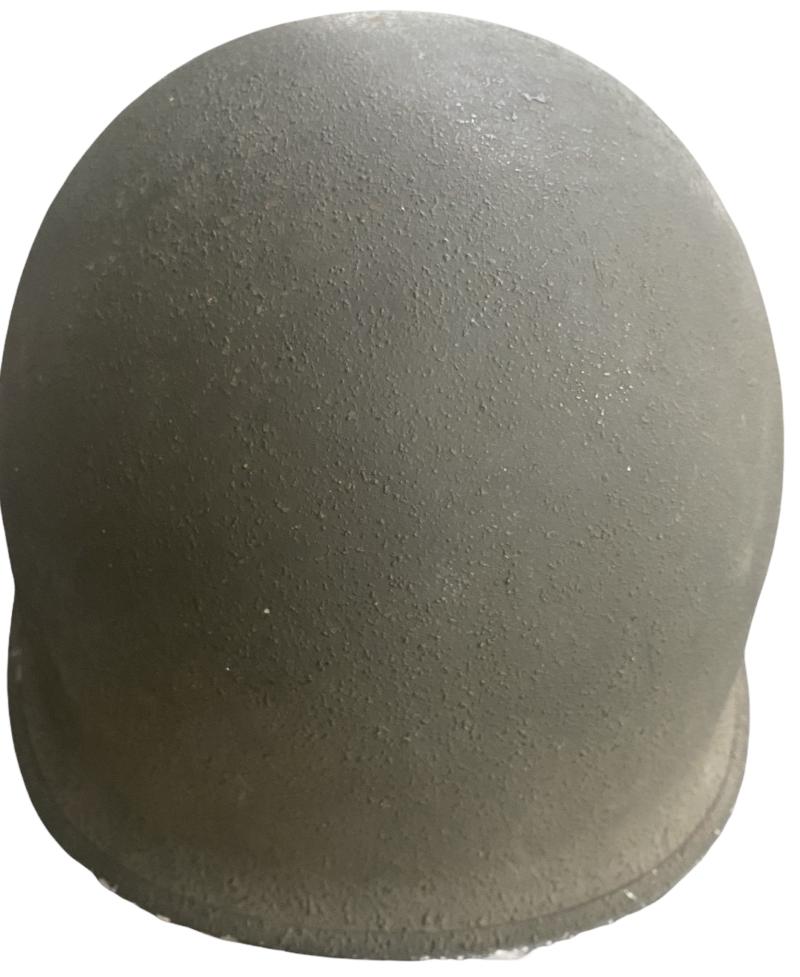 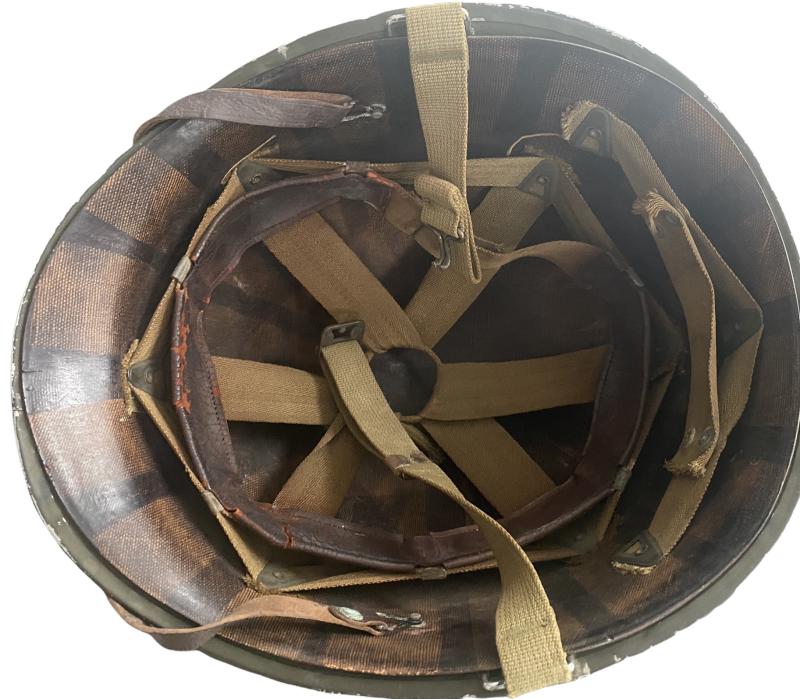 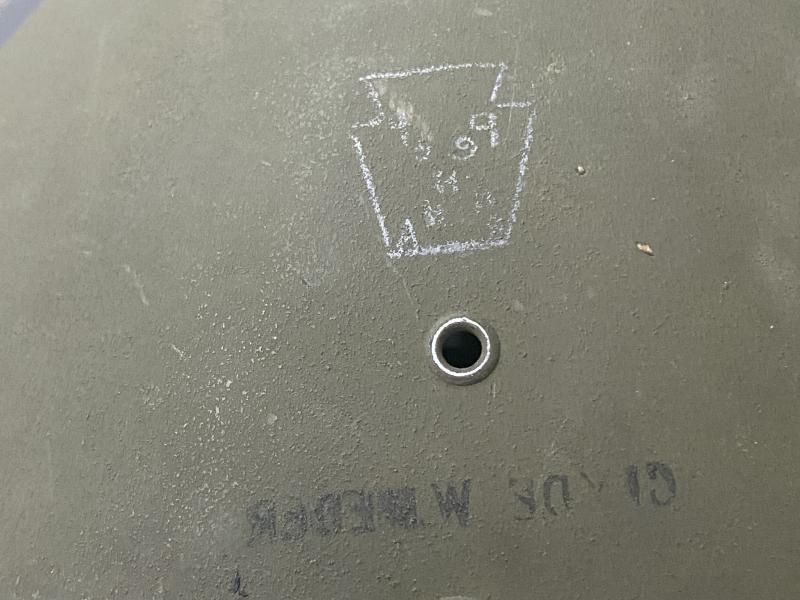 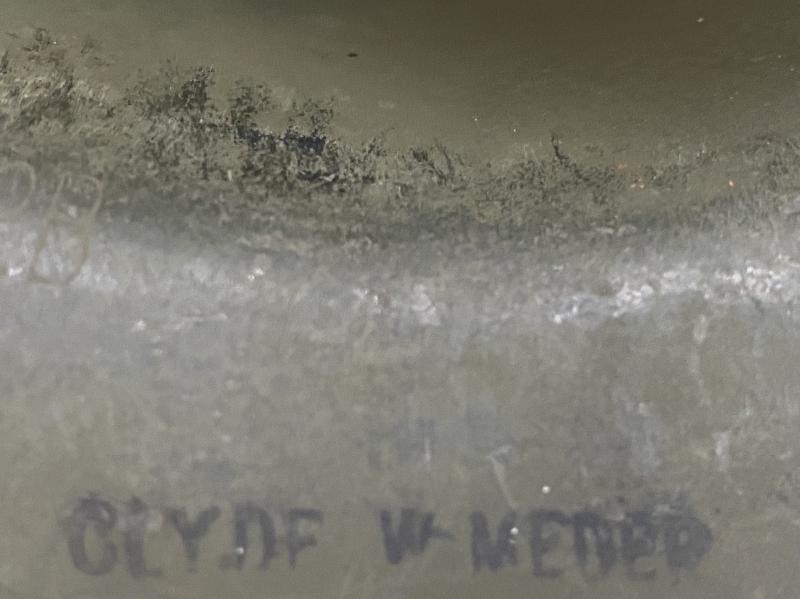 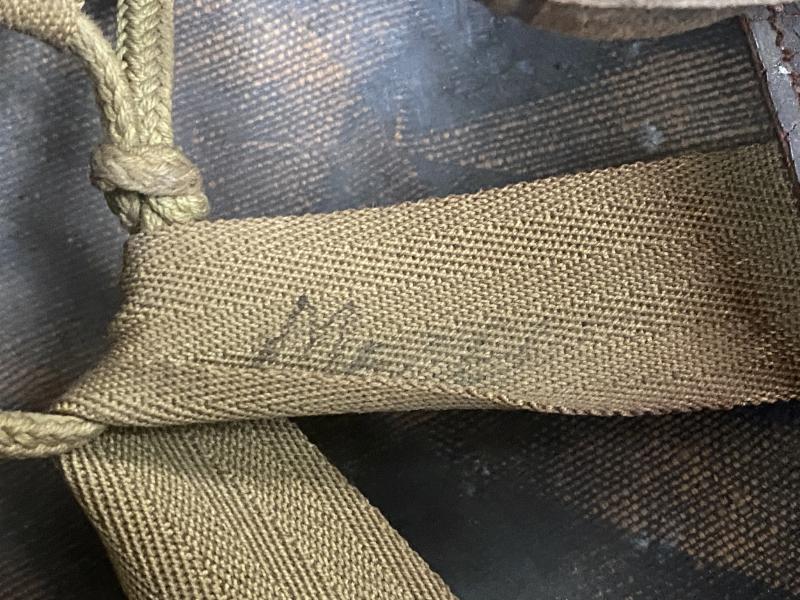 Another stunning named U.S. M1 combat helmet and liner. The shell compromising a so-called fixed bale and frontseam helmet. The shell is named Clyde W Meder. With the helmet is a very nice used helmet liner, also clearly named Clyde W Meder. Thge liner itself compromising a Firestone makers marked example. Firestone Tire & Rubber Co. was first contracted to produce helmet liners in April 1942. Fitted with original leather chinstrap, and leather sweatband fitted in the suspension. All clearly worn adding to the patina of this helmet.
Thanks to the research of one of our U.S. clients we now know some more about the provenance of this helmet;

-Born 18 November 1922 (Ashland, Schuylkill, Pennsylvania (Penna.)
-Died 11 October 2002 (New Jersey)
-Married to Esther M. Whitmer
-Graduated from Pottsville High School in 1940
-When he signed up for service he lived at 400 East -Norwegian Street, Pottsville, Schuylkill, Penna. (PA)
-He graduated from Williamson Trade School in 1943
-Service Nr. 820-26-38
-Joined 26 August 1943 from Allentown, PA
-While serving in the USA, Meder was a Seebee...specifically he was a carpenter and achieved the rank of 3rd Class Petty Officer
-His duty station was Camp Endicott, Rhode Island (RI)
-In February 1944 he was transferred to a program that no longer exists - back then it was named the "V-12 Program". This was similar to today's officer candidate schools for the different services. V-12 was US Navy; he attended this program/school at Dartmouth College, New Hampshire (NH)
Service ended 2 March 1946
-He was formally separated 27 June 1946 from the US Navy Personnel Separation Center, Boston, Massachusetts (MA).
-He then served after the war in the US Naval Reserve and achieved the rank of Lieutenant Junior Grade (LtJG) by 5 June 1949...in the Supply Specialty