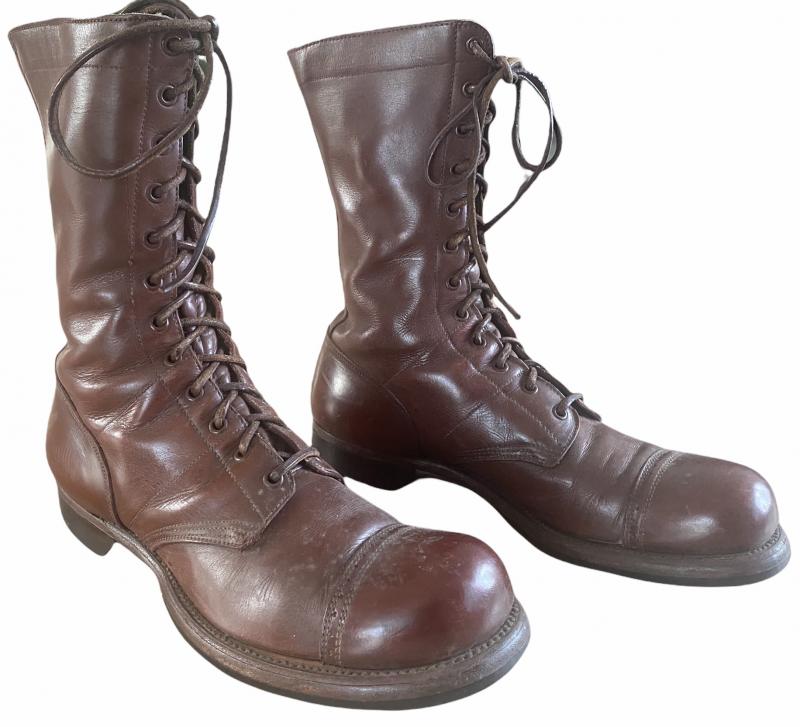 This is a pair of U.S. (Airborne) Paratrooper Jump Boots. Often refered to as "Corcorans" yet produced by various makers. and is still fitted with original ink stamped makers marked . and orginal leather leces The boots measure a size 10.5, and are in overall nice used condition The boots are also marked with an army laundry number. (H 2039) A very nice and attractive pair of U.S. (Airborne... read more

A Nice Used condition this rare piece of U.S. Airborne Equipment. This Rubber M7 Carrying bag intended for the M5 gas mask. The Rubber bag is intended to be used to hold the M5 assualt gasmask and used by all US Assault troops particulary by the troops landed on the beaches of Normandy in June 1944. In very nice used condition somesurface rust on the strap and small damage on one of them see pi... read more

A very nice and IMO nice used of an U.S. (Airborne)Lensatic Compass and a Carrying Case. As used by Airborne troops in for example Normandy and the Netherlands in 1944. The compass is clearly makers marked Superior Magneto Corp. Cannot be upgraded. read more

This U.S. M1916 Pistol Holtser 1944 dated example. Makers marked Boyt 44 and fitted with original leather lace. The holsters would hook on the pistol belt and were intended to hold 45cal pistols such as the colt and browning. A very attractive brown leather pistol holster with great patina! read more

We do not come across such large size Battle Dress Blouses, especially not in such nicely used condition.
The blouse compromises a 1940 pattern and has some nice use, mainly visible in the interior such as the collar.
There is a clear label present, measuring size 16 and 1944 date. The War Department marking of Broad Arrow and letter M indicate the year of 1944 as year of issue. ... read more

This is a very nice example of a Case makers marked U.S. M3 Trench Knife. The knife has some overall trace of use adding to its patina. Nicely makers marked on the blade and Ordnance bomb on the pommel. The absence of a date indicates an early post-1943 order. The M8 scabbard is in equal nice used condition discretely marked with an army and.or laundry number and clearly makers marked B.M. Co. ... read more

A very nice pair of WH (HEER) Y Straps i.e. Suspenders or So-Called Koppeltragegestell. The letter is in very nice and smooth condition and retains a fantastic patina. The suspenders appear to be named "HR" which is handwritten in the interior of the suspenders. The suspenders are marked wit RBN number. read more

In nice used condition this British Collarless Wool Shirt. The shirt is not fitted with a label yet is IMO a size 4 and is descent mannequin size. read more

WH (HEER/LW/SS) P08 Luger Black Leather Hardshell Holster.
Executed in black coloured leather this hard-shell holster has two belt-loops on the back. There is a small leather pocket in the interior of the top flap, intended for the quick loading tool. The holster is nicely maker marked OTO ,marked with the Waffenambt eagle and P08 on the rear. This holster is IMO in near mint condition.... read more